As part of the Melbourne Food and Wine Festival DiscoverVin hosted a food and wine dinner at Bistro Vue on Tuesday 5 March 2013.  Welcome to Earth was the theme for this year's festival.  The earth nourishes us - it's the source of all our food and wine.
DiscoverVin presented wines to highlight the contrasting terroirs of the Left and Right Banks of Bordeaux. Succulent Merlot based wines from Right Bank producers Chateau Dassault 2006 and Chateau D'Aiguilhe 2008 grown on the clay/limestone plateau of Saint Émilion and Castillon. Rich Cabernet based wines from the Medoc on the Left Bank of the deep gravel beds of the Gironde Estuary (Vivens 2005 and Amiral de Beycheville 2008 ).
The four course menu produced by Chef Chris and the Bistro Vue team was inspired by classic French dishes from the Bordeaux, given a modern twist.  Produce from the Vue Group gardens of Burnham Beeches in the Dandenongs featured on the menu. 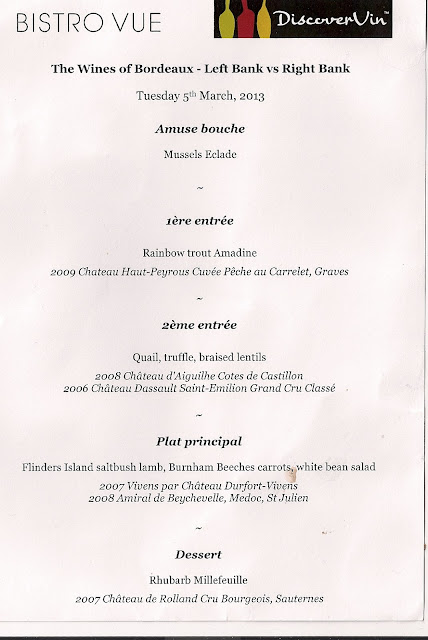