Franck Provost Paris Hair is France's number one salon and last night the Double Bay Salon was celebrating its 5th Anniversary.  Amber Renae, the Franck Provost brand ambassador, VIP's, members of the French Trade Commission and Alliance Francaise, bloggers, journalists, fashionistas and just about every French person living in Sydney was there! So French, so chic!!

DiscoverVin wines were sponsors of this event and we offered the following wines by the glass: 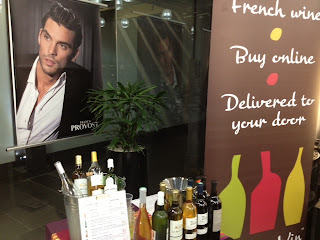 Domaine de la Croix, Irrésistible Rosé  - The name says it all! A delicious rosé from one of the top producers in Provence.

We also offered tastings of some of our best sellers:

All of these wines, I am happy to say, were a hit with Francophiles and French people alike.

There was a real buzz in the air as the glamorous models displayed the Summer 2013 (Hair Style) Collection - long soft curled tresses seem to be the hairstyle of the moment - pity I've got short hair!