Lesser-known Bordeaux wines you'd be mad not to try

From the Daily Telegraph

Lesser-known Bordeaux wines you'd be mad not to try

Driving to Clos Manou at Saint Christoly Médoc always reminds me of that bit in C S Lewis’s Voyage of the Dawn Treader where they sail to the edge of the earth. Leaving the city of Bordeaux behind, you pass the commune of Margaux, then St Estèphe, the estuary of the Gironde widening on your right. The elegant buildings grow more sparse, the sky seems to get bigger and you feel closer to it: the place feels forgotten, in a “here be dragons” kind of way.
Last week I promised to tour a few of the less-known parts of Bordeaux, the ones in which you might hunt out well-priced wines (not cheap wines, there is a big difference); and the northern Médoc is one of them. I think of it as one of Bordeaux’s newer areas because of Robert Parker’s recent anointing of Ch Sociando-Mallet, and because of Ch Cos d’Estournel’s great enthusiasm for their new Goulée vineyard (first vintage, 2004), on a gravel hill once surrounded by water. But that’s not the whole story.
At Clos Manou, they might only have made their first wine in 1998, but they have the oldest cabernet sauvignon vineyard in Bordeaux – great, gnarled vines thought to have been planted in the 1850s.
There is a particular flavour to the wines up here. They are broader and less edgy than reds from farther south. I often find what my mind logs as black coal-dust and black (as opposed to red) berries, but with a more open, new-worldy feel. If I were looking for a bordeaux to unite both left (Médoc) and right (St Émilion et al) bank fans, this is where I’d come. 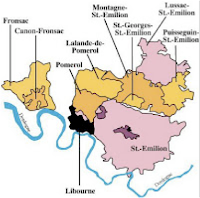 Another part of the region which has seen a big hike in investment over the past decade or two is Castillon Côtes de Bordeaux.

Viewed on a map, this appears as one of many satellites of St Émilion, with which it shares a border. The others – Montagne St É, Puisseguin St É; Lussac St É; St Georges St É – all bask in the reflected glory of the St Émilion name.

Castillon goes without, so has never been able to command such lofty prices, for land or wine; but what it does have is a share of the same limestone ridge.  It also has Stephan von Neipperg, an Errol Flynn lookalike (right down to the pencil moustache). He has owned Château d’Aiguilhe, the flagship estate of the Côtes de Castillon, since 1998. Its reds represent all that is special about this area: merlot gives them soft curves, cabernet franc a joyful, red berry and redcurrant leaf fragrance. In fact, the wines as a whole have a sumptuous, happy-go-lucky quality more often found in Pomerol than in St Emilion – and at far more affordable prices. Look out for the second wine of Château d’Aiguilhe, Seigneurs d’Aiguilhe.

Excellent value can be found in the other neighbouring Côtes de Bordeaux – in particular Francs (mainly from Ch Puygueraud, whose second wine, Chateau Lauriol, I mentioned last week).

There’s another area on this side of the estuary I sometimes like to look at and that’s Fronsac (and the superior Canon Fronsac). Unlike the other wines I’ve mentioned so far though, these do need a bit of explaining. Notable for their tannic undertow (they can be quite bitter on a bad day), these wines might be on the right bank but they appeal more to the more masochistic palate of the left-bank lover. I like them on a table – you know those times when you have a savoury dish that demands a wine with some mettle.