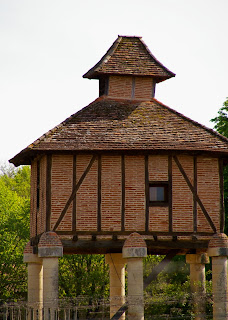 In french the word  pigeonnier means dovecote. It is also the name of the rarest wine produced by Domaine Lagrezette in Cahors.


Dovecotes dot the landscape throughout southwest France, often in the middle of a field, or as at Lagrezette in the centre of a vineyard.


Pigeonniers are located away from trees that may harbor birds of prey and from prevailing winds. They have smooth walls with a protruding band of stones to stop climbing predators. In France in the middle Ages, owning a pigeonnier was the privilege of the lord of the manor. The bird poo (known as colombine) was an excellent fertilizer.


The Lagrezette pigeonnier is an exceptional building on six columns.  The Lagrezette Pigeonnier wine is an exceptional wine.  Production is limited to about seven thousand bottles per year.  The vineyard is only 2.7ha and the yield is limited to between 15-20 hL/ha. The Malbec grapes are harvested and destemmed by hand.  Vinification occurs in large oak casks and the wine is aged for twenty-eight months in new oak casks. With favourable reviews from Parker (95 points for the 2001), Le Pigeonnier has become expensive and exclusive, selling at close to $1600 per case in America.