Le Guide Hachette 2011 – the French wine bible has reviews for 10,000 wines. The South-West chapter reviews wines from several of our suppliers.
The “jury” – a team of wine professionals from around the world, tasted each wine blind, described it in terms of colour, aroma and taste and then scored  each from 0-5.  A score of 3 is needed to be give a star, 4 for 2 stars and 5for a wine to be given 3 stars.


Cahors
Chateau Lagrézette
A world famous and critically acclaimed producer from Cahors in the South West of France, Chateau Lagrezette has five centuries of winemaking history.  Entrepreneur Alain Dominique Perrin, the former president of Cartier, has transformed Chateau Lagrezette.
DiscoverVin stock three levels of wine from Chateau Lagrézette.  Zette is the every day quaffer;  Zette Red, Zette White and Zette Rosé. A great bargain at  $20 per bottle.
The Chateau Lagrézette 2005 is an award winning Malbec for $36 per bottle. It was given a citation in the 2008 Guide Hachette.
The Dame d’Honneur is a super premium Malbec and the 2003 vintage is available for $90 per bottle.
The review of the 2007 Dame d’Honneur in the 2011 Guide Hachette gives us and Australian wine drinkers something to look forward to. Awarded two stars the Guide describes the wine as follows:
“The wine is, as often, an excellent expression of its heritage. Adorned with a deep purple color with hints of black, it reveals a delicious and exuberant nose of ripe fruit, licorice and menthol. Ample, sweet, well-structured and always very aromatic, it can be appreciates with duck or game. One year or two years of cellaring are possible. The 2007 Cuvée Dame Honor good structure and wood our two, wait at least three years to soften.” 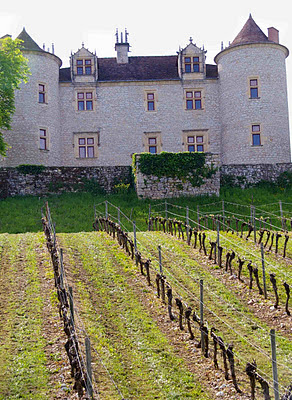